Welcome to my blog, where one may find all sorts of random, hopefully amusing tidbits about food & other things. 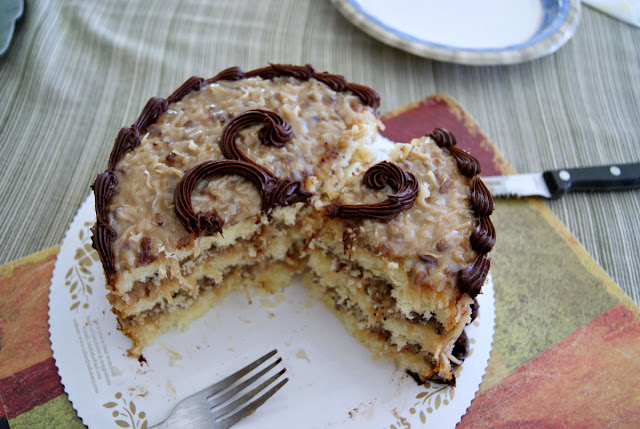 It's kinda hard to type when you just do your nails. Mine are dark burgundy with red flecks. It's perfect for my role as Cleopatra, tonight. Have you ever heard of an any race but your own themed party? Probably not, because my suite can sometimes surpass the boundaries of ridiculous and offensiveness.

And it will definitely be more successful than last night's venture. At around 10pm yesterday, I decided to go to bed, and then one of my dear floormates entered our room, ready to go out. When she asked if we wanted to come, I hesitated. Bad move. She pounced on it, and my two options of the night no longer fluctuated between whether I should sleep at 10 or 11, but between whether I should sleep immediately or go out.

I went out. And what a random night.


I dressed more than I have ever worn when I have gone out in winter; by that, I mean I wore a light jacket. It was still freezing, and the party part actually failed. Danielle and I briefly visited the Land of a Million Roofies, but our ultimate destination ended up being Stuff Yer Face. Disappointing turnout for the first weekend back, but the cheesy potachos more than made up for the entire night. Those slices of potato, sometimes slightly thick, giving them some substance, and other times, thinner and crispy. Layered, and drizzled with ketchup before being scattered with chopped fresh tomatoes and onions. A layer of cheddar cheese oozed over each potato slice. A generous heaping of sour cream with some chives for the requisite "healthy" green part of the dish made it perfect. 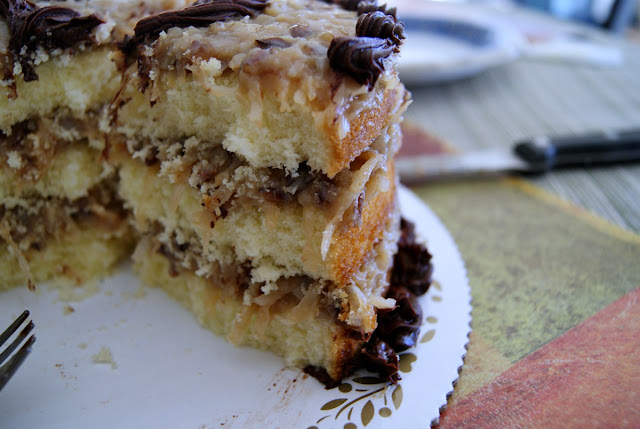 So after killing the gym time I put in that morning, we walked back to the bus stop. In the bus, we saw people we knew but were not expecting to see. And then there was more other drama after coming back .. it was just such a weird sequence of events. The night ended with shadow puppets, tickle fights, Billy Joel, and snow! It snowed finally!

So all in all, I'm in a good mood now. A competitive mood, too. The Indian food cookoff I was supposed to have isn't happening, but instead, he's bringing homecooked food, which will go up against my toasted coconut butterscotch bars, pending on RHA leaving the kitchen. I might have to employ my kickboxing skills. Or PK abilities (that's cool kid talk for PARKOUR). 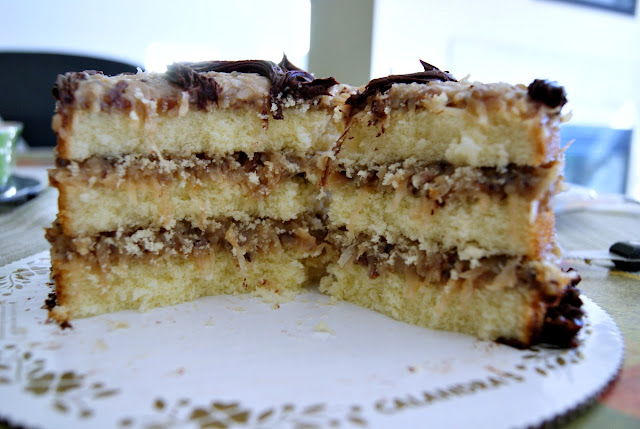 Either way, these bars were one of the last things I made at home. They remind me of the belated birthday cake my mom ordered for me from Calandra's Bakery, an awesome bakery that makes the best pastries and baked goods.

It was a three-layered white cake with German Frosting, and hints of Chocolate Buttercream. Everything about it was good. The white cake was fr3$h as hell (literally, it was probably baked that day) & the pecan-coconut frosting was completely unadulterated, with prominent notes of caramel. My only request would be more chocolate buttercream frosting the entire outside of the cake, but that's just me being incredibly picky. 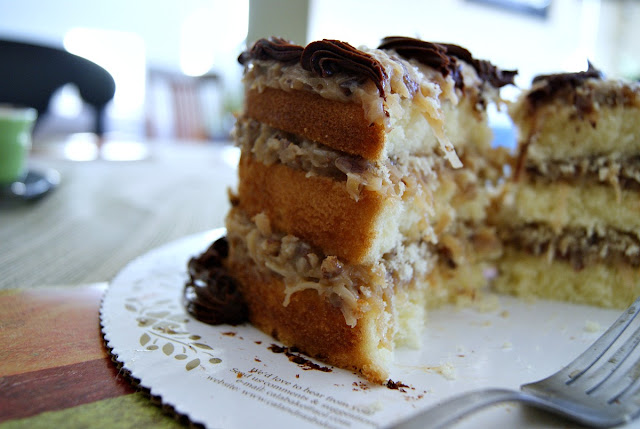 I guess this post was a tease, then. I just wanted to let you guys know this bakery is really good & that my mom is awesome for ordering the exact cake I wanted - German Chocolate Cake minus the chocolate cake part. No, my parents aren't aware I have a blog. I have just voiced my opinion on the perfect cake a plethora of times. Ha ha, look at me using a stereotypical SAT word. SAT ew. MCATS now! Can't wait ..
Created by Yat